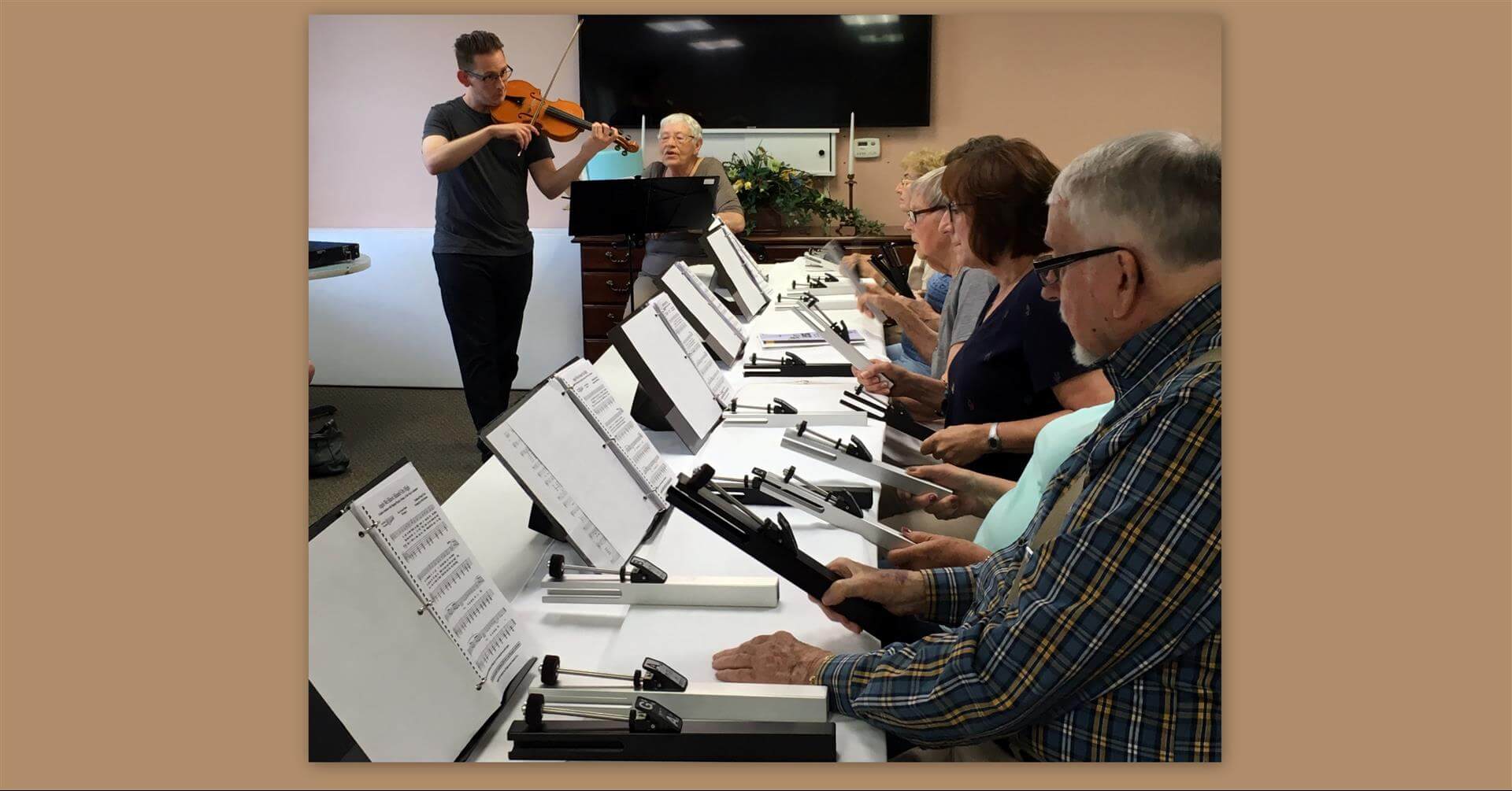 Musical group ready to “chime” in for Christmas

It all began as a rumor about a pristine set of choir chimes stashed away in some unchecked closet at Fort Scott Presbyterian Village. It turned into a search that uncovered a plain-looking suitcase, which turned out to house a full set of chimes.

And that turned into several months of learning and practice that will result in the inaugural performance of the Village Chimers at the community Christmas Dinner on December 5.

“There was one book – a how-to book – that had some time values and basic information,” said Village Chimer Phyllis Bradley. “We started with that. Pretty soon we had three to four people, but we needed at least seven to do this, so I asked a few around the community if they’d want to do this.”

The group spent at least an hour each week learning to master the chimes, which require some musical knowledge to operate.

Phyllis explained that the chimes work much like a piano keyboard – beginning with a “G” up to middle “C” with two additional octaves above that. The set up requires most chimers to be responsible for at least two notes for any song. Silver chimes are the natural notes, while the black chimes indicate the sharps and flats.

“We read regular music,” Phyllis explained. “We started with songs like Row, Row, Row Your Boat, and Mary Had a Little Lamb. Now we’re playing out of a hymnal.”

For the December 5 performance, the group plans to play Christmas standards like Silent Night, O Little Town of Bethlehem, O Come All Ye Faithful, I Heard the Bells on Christmas Day, and, of course, Jingle Bells.

Finding enough people might have limited the group, but members of the community – Cynthia Cooley, Joyce Gobl, and Linda Jackson – stepped in to fill in the gaps. And others, who don’t play chimes, have lent their musical talents to augment the group.

“One resident sings with us and plays piano,” Phyllis said. “And a local church plays with us. We maybe had 40 people just singing hymns for 30-45 minutes. They might not be able to see the music that well, but they were singing. It is thrilling to know that this can be a part of their day.”

Even Phyllis’ grandson, Kris Najarian, who is a violinist currently studying in Paris, takes time to play with the group when he comes home for a visit.

“I tell you, I really love music,” Phyllis said. “It’s so important for seniors – nothing lifts the spirits quite like music.”

PHOTO: Kris Najarian, a violin student in Paris, plays with the Chimers whenever he visits his grandmother, Phyllis Bradley. Phyllis organized the Village Chimers.

Posted on
November 10, 2019
by
Cindy Kelly
filled under
Art is Ageless
Residents
« Back to Blog